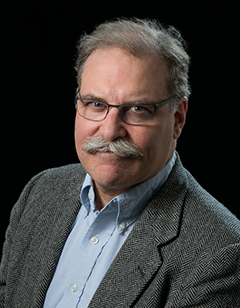 
Abstract: The promise of next generation communication networks is to extend communication to solve more than the big three applications supported well today, namely voice, video, and web surfing.  Enabled by higher peak rate communications and lower latency, myriad new applications will be made available.  Some of these will enhance communication directly to humans through new types of user terminals such as VR or AR connected devices.  However, many more will be to support machine connections, doing work and providing value to humanity in indirect ways through the new solutions they provide.  In the talk we will discuss the benefits that the FutureX network will provide with some specific examples towards dramatic changes in industrial automation as well as returning to humans a most precious resource:  more time!

Biography: Dr. Theodore (Tod) Sizer is Lab Lead of the Mobile Radio Research Group in Bell Labs.  In this role he leads teams in six worldwide locations innovating in all aspects of wireless systems, technology and software.  In addition his teams collaborate with fixed access systems including copper and optical with special opportunities being explored at the convergence between these and wireless.

Tod has been leading the vision and research of 5G and the new technologies that will be required to meet the needs of an Always Connected world with expectations of Infinite Capacity.  In the past he has had significant impact as a key proponent and inventor of the lightRadio™ and small cell technology and systems leading to Alcatel-Lucent’s product line solution to address the current Wireless Data explosion.  During his tenure at Bell Labs he has performed research in Wired and Wireless Home Networking, Fixed Wireless Loop systems, Video Watermarking technologies, Optical Computing and Switching Systems, and High Power Laser Design. He was a member of the technical team in Lucent’s role as a promoter in the Bluetooth Special Interest Group (SIG).

Tod graduated from Amherst College, Magna Cum Laude and received his Masters and Doctorate from the Institute of Optics at the University of Rochester.   In 2007 Tod was named a Bell Labs Fellow “For sustained creative contributions to wireless systems, particularly in the convergence of packet and wireless technologies” and in 2012 was named a WWRF Fellow.  In 2012 he received the Popular Science Breakthrough Innovation award for the lightRadio invention.  A member of the Board of Directors of the Alcatel-Lucent Foundation, he also serves as a member of the VCAT (Visiting Committee on Advanced Technology) which is the principal industry advisory board towards NIST (National Institute of Standards and Technology), part of the US Department of Commerce.  He is the author of 52 US patents, over 50 refereed publications and is a member of the IEEE and OSA. 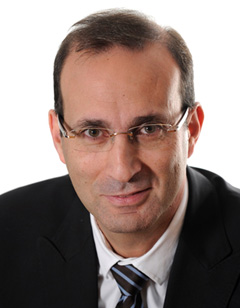 Abstract: The best way to define IoT is to describe it as the vision to observe the world in real time and be able to act on it for better life! Business models can be transformed to accelerate efficiency and increase productivity. Many technologies are required to make the vision a reality: censors, connectivity, cloud, and big data. All are very relevant, but the keynote will focus on the challenges related to the connectivity aspect using radio technology. Obviously, many of the things can be connected via a local gateway using Bluetooth, Zigbee or other similar technologies, but many of the IoT applications require ubiquitous coverage that only cellular technology can provide. Recently, the 4G standard has evolved to tackle the IoT challenges and two flavors of narrow-band LTE have emerged, both optimized for IoT requirements. The talk will address this topic and discuss how the 4G technology is enabling the IoT and touch on its evolution towards 5G.

Biography: Dr. Georges Karam Is Founder, President, and Chief Executive Officer of Sequans Communications. Before founding Sequans Communications, Georges Karam was vice president of cable access for Juniper Networks, running the cable engineering and marketing departments and managing the cable sales launch in Europe, Middle-East, and Africa. He joined Juniper Networks when the company acquired Pacific Broadband Communications (PBC), where he was the first executive to join the founding team to act as vice president of engineering and general manager for Europe. Georges has served in a variety of senior management positions at Alcatel, SAGEM and Philips. He is a senior member of IEEE, has authored numerous technical and scientific papers, and holds several patents in digital communications. 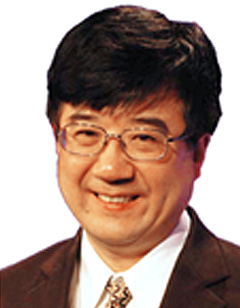 The Blueprint of 5G - A Global Standard

Abstract: 5G is now becoming a global movement as a new generation of wireless technologies innovation, the standardization of 5G connectivity technology will have a fundamental impact on our daily life and the future of our society. In this talk, we present the roadmap of the 5G standard, the building block of fundamental technologies, the design principles and latest progress for the radio access network and master network architecture. Some of the technology challenges and advanced research directions will also be discussed.

Prior to joining Huawei in March 2009, Dr. Tong was the Nortel Fellow and global head of the Network Technology Labs at Nortel. He joined the Wireless Technology Labs at Bell Northern Research in 1995. He had pioneered fundamental technologies from 1G to 4G wireless with 350 granted US patents.

Since 2010, Dr. Tong is the vice president of Huawei wireless research. In 2011, He was appointed the Head of Communications Technologies Labs of Huawei, currently, he spearhead to lead Huawei’s 5G wireless research and development.

Dr. Tong was elected as a Huawei Fellow and an IEEE Fellow. In 2014, he was the recipient of IEEE Communications Society Industry Innovation Award for “the leadership and contributions in development of 3G and 4G wireless systems”.

Dr. Tong serves as Board of Director of WiFi Alliance and he is the fellow of Canadian Academy of Engineering. 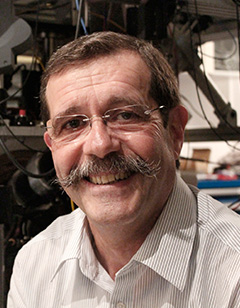 From Einstein’s Doubts to Quantum Information: A New Quantum Revolution

Abstract: In 1935, with co-authors Podolsky and Rosen, Einstein discovered a weird quantum situation, in which particles in a pair are so strongly correlated that Schrödinger called them “entangled”. By analyzing that situation, Einstein concluded that the quantum formalism is incomplete. Niels Bohr immediately opposed that conclusion, and the debate lasted until the death of these two giants of physics. In 1964, John Bell discovered that it is possible to settle the debate experimentally, by testing the now celebrated "Bell's inequalities", and to show directly that the revolutionary concept of entanglement is indeed a reality. A long series of experiments, started in 1972, yielded more and more precise results, in situations closer and closer to the ideal theoretical scheme. After explaining the debate and describing some experiments, we will show in this talk how this conceptual discussion has prompted the emergence of the new field of quantum information and quantum technologies.

Biography: Born in 1947, Alain Aspect is an alumni of ENS Cachan  and Université d'Orsay. He has held positions at Institut d'Optique, ENS Youndé (Cameroon), ENS Cachan, ENS/Collège de France, CNRS. He is currently a professor at Institut d'Optique Graduate School (Augustin Fresnel chair), and at Ecole Polytechnique, in Palaiseau.

Alain Aspect research has bore on tests of Bell's inequalities with entangled photon (PhD, 1974-1983), wave-particle duality for single photons (1984-86); laser cooling of atoms with lasers below the one photon recoil (1985-1992, with Claude Cohen-Tannoudji); ultra-cold atoms, quantum gases, and quantum simulators (1992- , in the Atom Optics group he has established at Institut d'Optique). 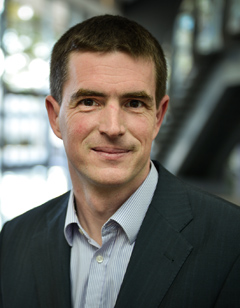 The On the Path to 5G

Abstract: In less than two decades, cellular communication has transformed society and the way people interact with one another; it is well on its way to transform how everything interacts with everything else with profound consequences on most industries, economies and work flows. On the path to 5G, one innovation at a time, the cellular industry will transform everything again… including itself.

Serge began his career with Qualcomm as an engineering intern in 1995, initially working on IS-95 system evolution. During his tenure, he has held various technology leadership and product management roles in CR&D, QSIO/3GPP, Europe business development and QCT. Serge's contribution was instrumental in establishing and expanding Qualcomm's technology, standardization and product leadership in UMTS and LTE.

Serge holds a Master in Telecommunication Sciences from the Swiss Federal Institute of Technology in Lausanne, Switzerland. 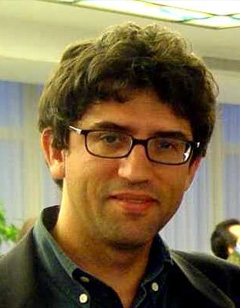 Abstract: Spatial reuse is by far the greatest capacity booster in wireless networks. Historically, making cells smaller and smaller and bringing infrastructure nodes closer and closer to the users allowed to achieve orders of magnitude increase of the wireless capacity (bit/s/km^2) throughout 4 (almost 5) generations of cellular systems. On the other hand, densification of the infrastructure incurs practical limitations due to the cost of deploying and operating the backhaul network to support infrastructure nodes (small cell base stations, remote radio heads, etc..). In the past few years, Edge Caching has emerged as a viable solution to provide scalable per-user throughput at potentially competitive costs. Edge Caching consists of disseminating predictable popular content for capacity-guzzling applications (notably, video streaming) throughout the network nodes (both infrastructure ''helpers'' and users devices), such that most traffic remains local and reachable in one or a few nearest-neighbor hops. Devices on-board memory is a cheap and yet substantially untapped network resource.

Caching into network devices can eliminate the backhaul requirement and yet allow for very high spatial reuse.  In particular, for certain relevant network models it has been formally proven that Edge Caching can ''turn memory into bandwidth'', providing a per-user throughput that grows linearly with the on-board memory, and it does not decrease with the number of users.  A large amount of theoretical ground-breaking work dedicated to Edge Caching has been published in the information theoretic and communication theoretic literature in the past few years. Specifically, the cached content plays the role of ''side information'' in order to enable advanced PHY techniques, such as distributed multiuser MIMO and interference mitigation.

This overview talk provides a review of the most exciting theoretical results on Edge Caching and of its interplay with advanced PHY schemes in wireless, and advocates Edge Caching as a key technology that should be enabled in 5G networks, in order to achieve unprecedented area capacity at competitive costs.